So, now I had the concept and the characters...but how to bring them together in a children's book length story/poem?

The first vision in my head was of the toys going on a picnic.  When I started writing I had no clear plot in mind but, like the characters themselves, it evolved, the rhymes flowing and leading me to a story I had no idea of initially.

All the characters featured throughout this first poem so I got a good bit of practice when it came to illustrating, thinking of how they would look from different angles rather than my face-on toy shelf picture and the reference 'stills' I'd drawn of each.

I won't give the story away but I ended up with a surprise puppy character and my illustration of him with Baa Baa is one of my favourites!

As Wheelie-corn proved to be the central character in this first poem, it gave me the idea of focussing on a different toy in each subsequent story.  The Fishing Trip, Bertrand's poem, followed on whilst I was in the flow but the illustrations proved more challenging as it mainly focusses on him and Fluff and it's hard to bring nuances of emotion to a stuffy beady eyed bear!  However, I found Fluff's many legs helped to bring him alive!

By story three, Soldier Sam's, I realised that I was actively thinking about the illustrations as I wrote and this one proved to be a dream to write and draw.

So, three poems and illustrations complete and a good response from those I'd shared them with.  Most important, of course, was that of my target audience - 2 year old Marnie. 'Where's Baa Baa's ball gone, nanny?' she asked when she saw him in the second story and pictures of Fluff holding some pears, flying through the air and fishing cemented him as her favourite! 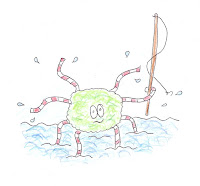 Ideas for stories about the remaining characters are building.  It may be that they just end up as something I share with my grandchildren... or could there be more to it?... dare I send these samples out to 'book people' for consideration? 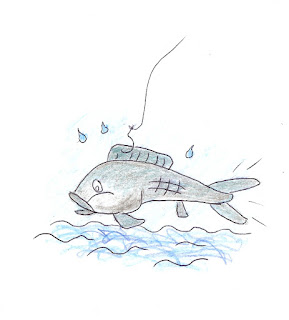 Plenty more fish in the sea... 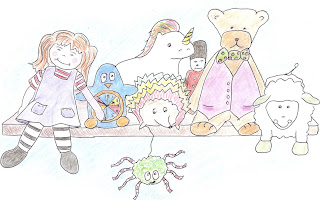